The Healing Properties of Herb Robert 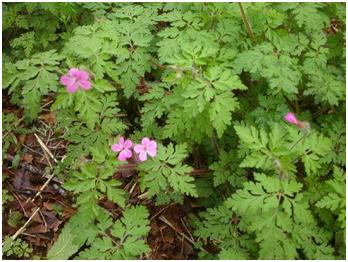 Last month, a client send me a request regarding “Herb Robert”. The person wanted to know if anyone grew Herb Robert. I replied that it was the wrong season to look for it, mainly because my garden is over run by Herb Robert in the spring. However a couple of days later I went to my garden and discovered that it was very much alive, not as abundant as in spring but sufficient to put in a salad or make a cup of tea.

Since it has very relevant properties for the season (change of weather temperature, thus affecting our metabolism), I have decided to share some info about this wonderful weed.

This herb is called Robert after the medieval monk who used it with great success in his healing work.

It is also known as cranesbill, bloodwort, red robin, and felonwort ~ some herbalists also refer to Herb Robert as a ‘forgotten treasure’ partly because it is one of those herbs that has multiple uses in terms of its health giving properties, including being helpful in the treatment of certain forms of cancer and also in boosting the immune system.

Research has found that Herb Robert is a source of germanium, and germanium has a special role to play in the body because of its unique ability to make more oxygen available to the cells. More oxygen, at cell level, means the body has the opportunity to fight disease more efficiently, and healing can take place quicker. If the cells experience a lack of oxygen, they cannot get the nutrients, to regenerate. Those cells then become anaerobic, the state that leads to pain, disease, wayward cells and cancer.

Herb Robert is known to medical herbalists as a good all-rounder and preventative tonic because of germanium.

Germanium’s remarkable effects on the immune system are well known in medical fields. It has a good reputation as an energy giver, immune builder, having powerful therapeutic and preventative qualities. Also it is a vigorous adaptogen, acting to restore minor or major health imbalances in the body.

Germanium provides antibiotic, antiviral and antioxidant assistance which is all the more important nowadays when our bodies have to cope with so many different kinds of pollution from different sources.

So why not look out for it? It’s very pretty, with its purple stems, and hard to miss with its crane bill, furry buds and delicate pink flowers. The leaves are like tiny ferns, which you can chop up and put in your salad, or use it to make a cup of tea (tasting a little bit like ginseng tea).

With this change of weather, temperature, moisture…. your metabolism is not certain what is going on and definitely would benefit from taking a higher dose of Vitamin C.

“Vitamin C or L-ascorbic acid, or simply ascorbate, is an essential nutrient for humans and certain other animal species. Ascorbate and ascorbic acid are both naturally present in the body when either of these is introduced into cells, since the forms interconvert according to pH.”

Immune system:
Vitamin C is found in high concentrations in immune cells, and is consumed quickly during infections. It is not certain how vitamin C interacts with the immune system; it has been hypothesized to modulate the activities of phagocytes, the production of cytokines and lymphocytes, and the number of cell adhesion molecules in monocytes.

Vitamin C is a natural antihistamine.

Daily requirements:
There is continuing debate within the scientific community over the best dose schedule (the amount and frequency of intake) of vitamin C for maintaining optimal health in humans.A balanced diet without supplementation usually contains enough vitamin C to prevent scurvy in an average healthy adult, while those who are pregnant, smoke tobacco, or are under stress require slightly more. However, the amount of vitamin C necessary to prevent scurvy is less than the amount required for optimal health, as there are a number of other chronic diseases whose risk are increased by a low vitamin C intake, including cancer, heart disease, and cataracts.

High doses (thousands of milligrams) may result in diarrheal in healthy adults, as a result of the osmotic water-retaining effect of the unabsorbed portion in the gastrointestinal tract (similar to cathartic osmotic laxatives).

Should you need to supplement your diet with extra vitamin C, consider:

It is a cherry like fruit of a small tree, Malpighia glabra, of the West Indies and adjacent areas, having a high concentration of vitamin C.

Distinctive characteristics:
Besides its extraordinarily high vitamin C content (roughly 50 to 100 times that of oranges), the acerola is also rich in provitamin A as well as vitamins B1 and B6. Due to this unique composition, the acerola has a very strong antioxidant effect on human cells and the human immune system.

ACTIVA STARTER is an Acerola complex product which provides energy, balance and structure to your metabolism.